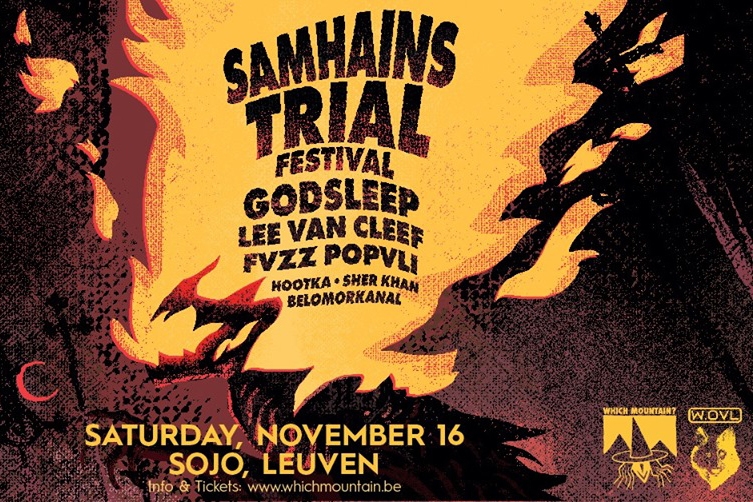 Which Mountain? is preparing the first edition of the already awsome Samhain Trial Festival at JH sojo on the 16th of November.

GODSLEEP
Formed in 2010, Godsleep have been working relentlessly since then, walking their way to entering the heavy rock pantheon.
Having been characterized as one of the most promising bands of the heavy / psychedelic rock sound, from their very beginning, the Athenian heavy rock rollercoaster based its very existence on powerful live appearances.

2018 hails the release of "Coming of Age", Godsleep's sophomore full length album, as well as their most mature one, to date. Having kept their sound's core ingredients, heavy / fuzzy guitars, thick bass lines and powerful groovy drumming, Godsleep enriched their songwriting with uniquely addictive female vocals which vary from psychedelic howls and haunting melodies to throat-ripping edgy screams.
Be prepared for all that is to come!

LEE VAN CLEEF
After their very promessing passage last years at JH Sojo with Naxatras, it's time to bring these guys back to Leuven!

Last year the album "Holy Smoke" quickly exceeds the threshold of 200,000 YouTube views, soon the vinyl became sold out aswell!
In the meantime, the band receives many positive reviews from the most important heavy rock / Psych platforms (the Obelisk, stoned meadow of doom, etc.), being included by Bandcamp among the 20 most interesting artists of the new Italian Psych scene.

They played and shared the stage, among others, with: Acid King, Kadavar, Elder, Electric Octopus, Mythic Sunship, participating in European festivals.

We are very happy to have them back on our stage!

FVZZ POPVLI
Raised in Rome by Pootchie and Datio in A.D. MMXVI, with the conception of a powertrio, a direct and rough way to bring heavy fuzzy riffs. Their sound melts Black Sabbaths heavy riffs with the attitude of the roughest garagepunk bands like The Stooges, adding the psychedelica from the 70's. This way these guys are getin' their own style!

HOOTKA
In the beginning of 2009 they started up Hootka as a way to play the music they (we) love so much : Stoner Rock! Curly and Trixie already played in Boozeroona , a Sin City stoner legend . Hoggy played and still plays in more metalbased bands like Creature and Kruagre. The name is based on the Jim Jarmush flick 'Dead Man" starring Johnny Depp and Iggy Pop among others . Melting the psychedelic sounds of Stoner with the raw low sound of doom to creature a gloomy atmosphere and thus creating a wall of sound kicking you in the nuts !!

SHER KHAN
Sher Khan is an alternative instrumental noise band from Leuven, consisting of 2 guitars and a drum. One is responsible for the bassy guitar tones and the other for spherical noise, supported by booming drums.

BELOMORKANAL
This young local band has a small connection with Russian cigarettes we think. Come and check these crazy guys out!
We love them already! Danny Blue And The Old Socks 24U STELPLAATS | game of skate